If you have given my podcast The Lemonade Budget for Champagne Social Butterflies a listen this week, you will have already heard me enthusing about what a good time I had at Wellingborough’s Little R’ale House on Saturday night. Since then, I have already re-watched musical comedian Friz Frizzle’s awesome keyboard-less* headline set again on YouTube, as I saw it was premiering and my goodness it’s funny! Right now, as I type in the sweltering  it-never-is-only-twenty-four-degrees heat of the post-thunderstorm evening, my own set is premiering on YouTube. And call me a multi-tasker (I won’t hit you), but I am simultaneously arranging my next virtual gig and watching someone else’s (Scott Bennett’s) right now…

Of course these are sensible things to do on a hot laptop in the middle of a heatwave! It’s weird this weather isn’t it? One second you are lying around all lethargic like a Victorian poet on laudanum, then the next second you are convinced you have absorbed the power of the sunshine like some kind of crazy leaf full of chlorophyll, and you have to buzz around and annoy the pale and wan Ophelia of the sofa. I will join Ophelia later to watch series 2 of The Sinner and I fully intend to half-slide off like The Death of Chatterton. But most of today I have been buzzing round the actual leaves, shouting, “Bugger off, butterflies! Stop egging my cauliflowers!”

As for last Saturday, that was an emotional time… In a good way. I have been pretty happy to associate with my social bubble and see other dog walkers from a distance, but an actual live gig meant meeting other people. Yes, socially distanced and all outdoors, but still… people. I know a few at this time who get a bit nervous at the prospect of going out and about before they go out and about, and pre-gig nerves are always normal, but I don’t know if any of you get the whole waking up at 3 am the following night and feeling anxious about it then, like me? Oh my life, my heart was racing; Fitbit said I’d been doing exercise for an hour and twenty-five minutes in my sleep – and no, it wasn’t any of that shenanigans, thank you very much! I just need to de-flipping-stress! Everything was fine. We had proper social distancing, our own mic covers, hand-sanitiser; the organisation was tip-top.

So, my first gig back. With friends! I have so missed gigging, and it was awesome to get back out there. I felt ever so rusty, but it seemed to go down well, and it was brilliant to chat about writing and what it’s like to gig after 5 months’ break with Doug Carter and Pete Prodge. Doug has a great stage presence and his new stuff went down a treat with the crowd. Also it was fab to see Doug’s partner, Jay, again who we dragged on stage at Coventry Comedy Festival last year at one of our Baron Munchausen shows. ‘Ewan Kershaw’ was his usual effervescent self, and his story about the hamster is a must hear, honest! Ewan is basically an über-Neil. I hadn’t met MC Andy Gleeks before, but he’s really, really good. And apparently he is in competition with Mark Row, who also played that night. Like I mentioned on The Lemonade Budget, I’ve known Mark for a while and he did the A1: Long Road to Edinburgh film about his journey as a fledgling stand-up. He is a fab storytelling comedian with a rich mine of teaching-based material to draw from. Check out what those two are up to on The Inane Campaign podcast, the scamps!

Next gigs all booked – online What’s in the Box on Saturday 22nd August, and I am also playing Kaya Festival 11-12th September. 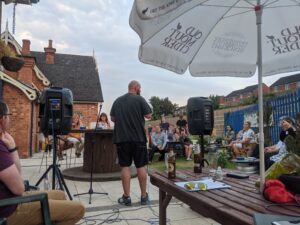 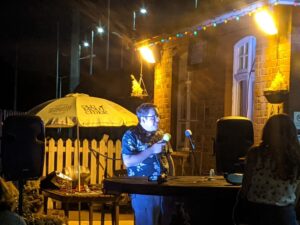 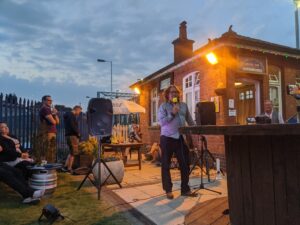 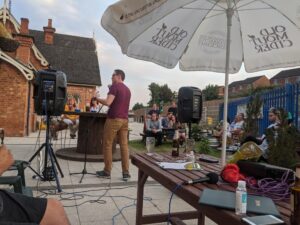 *The venue alerted the promoter a few days before the gig that the council had categorically said no to live music, which is what he does… have a look at his set. How he handles this dilemma is ingenious!